The DeJoy Controversy: Are Leaders Wanted in the USPS?

The US Postal Service has gotten more publicity this year than any time in modern history. A Google search for “USPS Postmaster General” yields 23.8 million results, including multiple front-page stories in the Wall Street Journal, New York Times, and Washington Post this month.

Many have challenged the qualifications of new US Postmaster General Louis DeJoy. Two Democratic Congresswomen have written to USPS board member John Barger. Katie Porter (D-CA) asserted, “It’s clear that Louis DeJoy isn’t qualified to be the Postmaster General. He’s one of the few in history, if not the only in history, who didn’t come up through the Postal Service.” Raja Krishnamoorthi (D-IL) added, “The appointment of Mr. Louis DeJoy as Postmaster General was highly irregular and we are concerned that his candidacy may have been influenced by political motivations.”

To summarize, the critique of DeJoy has been threefold: (1) he’s a Republican donor; (2) he knows the private sector, not the public sector; and (3) he built a company that did business with the USPS. As a result, they conclude: he must be unqualified, incapable, and conflicted.

Is the Criticism Valid?

The first part of this argument is accurate. DeJoy is indeed a Republican donor. He has spent his career in the private sector, having built New Breed Logistics from a small trucker into a market leader in contract logistics, serving customers like Verizon, Boeing and Apple. And he worked with the USPS as a supply chain partner, winning the USPS Quality Supplier Award four times.

Should these qualities disqualify someone from public service? In fact, the exact opposite is true.

I first met DeJoy 15 years ago. He was confident and aggressive, and spoke with a New York-inflected accent. As one of his investors said to me, “His bark is worse than his bite!” In fact, DeJoy would prove to be a genuine listener. He would challenge those around him, but then change his mind when colleagues gave him good reasons to do so. I believe these attributes are what enabled him to scale New Breed into a $615 million company.

Does Business Experience Matter in Government?

It seems to me that building one of the best companies in logistics is an outstanding qualification for the USPS. When the USPS was established in 1775, the first postmaster general was Benjamin Franklin. Would you say that Franklin was “partisan,” in light of his political views? Also, would you say that he had a conflict of interest, given the fact that he owned a publishing business? In the end, those were the very qualities that made Franklin a source of unique expertise and leadership with the USPS.

Does this mean DeJoy is Benjamin Franklin? No. But political involvement, private sector experience, and connectivity to the USPS are not reasons to disqualify people. If they were, why would any capable leaders join the government?

What is the True Issue for the USPS?

The real challenge facing the USPS is the steady decline in volumes. In sum: paper mail has been replaced by electronic mail. As a result, USPS volumes have dropped 50% in the last 15 years. 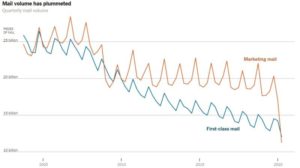 Critics will argue that DeJoy is weakening the Postal Service’s ability to handle the elections. But a simple review of the numbers is in order. The USPS handles 472 million pieces of mail per day. In 2016, 138 million Americans voted. Even if every single American voted by mail in 2020, this would equate to three hours of additional work. There is no reason why the USPS couldn’t easily handle this volume.

Meanwhile, the USPS is continuing to lose volumes, and is on track to lose $9 billion this year. Its financial and operational troubles are well-documented.

What the USPS needs most is a leader who can formulate an effective response to this challenge. Whom else if not a supply chain entrepreneur?